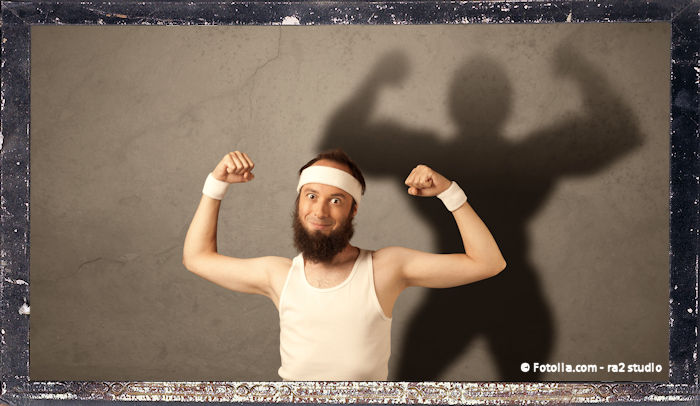 My grace is sufficient for you, for my power is made perfect in weakness. (2 Corinthians 12:9)

What do you picture when you hear “God’s power is made perfect in weakness?” Is it something like “in spite of my weakness, I can experience God’s strength”? It’s something like you get up in the morning feeling like you hadn’t slept a wink. Coffee makes no difference, and you have an impossible day ahead of you. So perhaps you say a quick prayer for help, somehow untapping physical and emotional resources you didn’t know you had. You get into bed that night wondering how you did it and offer another quick prayer, thanking God for getting you through.

I’d say this is a pretty common occurrence for a lot of people (with or without the prayer). We are often surprised that we can do more than we expect. When necessary we find strength we didn’t know we had. That’s a real thing. And whether we believe in God or not, whether we pray or not, it’s something to thank him for. But that’s not what this verse is about.

Human potential is a fascinating thing. Most of us have little to no conception of what we really are. The vast majority of us have more brain power and more physical ability than we realize. It isn’t until the opportunity arises that we reckon with the stuff we are made of. That’s still not this.

Much of Paul’s second letter to the Corinthians is his critique of certain self-appointed leaders, referred to (in many English translations) as “super-apostles” (see 2 Corinthians 11:5). These were impressive folks, especially in terms of their outward appearance and speaking ability. Paul, on the other hand, didn’t score very high on externals. What he was seeking to show the Corinthians was that what really counted was not personal appeal and human ability, but the genuine nature of God’s power at work through otherwise unlikely people such as himself.

Far from possessing the confident, self-reliance of the super apostles, Paul had suffered greatly for his faith in all sorts of ways. He explains this in detail in chapters four and five of the letter. For example, he writes:

Note Paul’s reference to “our outer self is wasting away,” which most likely means that “this light momentary affliction” is an understatement. It’s easy to miss what Paul must mean by his “outer self wasting away,” because he so quickly mentions “being renewed day by day.” The inner renewal is very real, but we need to grasp the implications of this occurring in a body that is “wasting away.” It is here that we can begin to understand how God’s “power is made perfect in weakness.”

God’s power is not a booster to otherwise weak persons. He is not a heavenly energy drink giving us the extra jolt we need to make it through the day. When God told Paul, “my power is made perfect in weakness,” this is to say that God’s power and our weakness co-exist within the believer at the exact same time.

Paul illustrates this in an earlier part of chapter four, where he writes: “But we have this treasure in jars of clay, to show that the surpassing power belongs to God and not to us” (4:7). The power of God residing in us is treasure contained in weak, fragile vessels. The treasure doesn’t change the quality of the vessel.

On one hand I think we know this. We know God’s power doesn’t turn the fragile clay into durable gold. We still retain our bodies as they are. Yet I have the impression that many assume if the power of God truly resides in us, we would feel the Holy Spirit pulsating through our veins or something like that. Paul, on the other hand, was trying to explain to the Corinthians that God’s power resides in and is expressed through truly weak vessels. God’s power doesn’t make the weak feel strong. It might make the person look strong to others because it is so effective. This is why it is easy to get confused. When God’s power works through a person, we tend to give the person an inordinate amount of credit. Not that we shouldn’t acknowledge a person’s role in their being used by God, it’s that we need to remember that the power in no way originates in the person, but in God.

It’s not just others that confuse the person’s role in being a vessel of God’s power. When we are weak, sensing our inability to be vessels of God’s power, we often look to ourselves for his power, waiting for some sense of emerging ability upon which to rely. But if we understood this as Paul did, then we would know that we are always weak and that God’s power doesn’t depend on a personal sense of strength. Not only does God want to work through us in spite of our weakness. He works through the weaknesses themselves.

When we think of elite athletes, I imagine that we don’t think of them as illustrating strength proven through weakness. But think again. To function at extraordinary levels necessitates pushing oneself to the furthest extremities of their abilities. It’s misleading to observe a medal-contending weightlifter, for example. Their muscles are bursting where we didn’t think muscles existed, while the vast majority of us wouldn’t lift the weights a millimeter off the ground let alone chest level and higher. To succeed, however, they must push themselves beyond their ability to a place where they feel the weakest, where they don’t actually know if they will be able to do it. It is there, in the realm of weakness, where they must go. It is there that strength is proven.

The power of God is proven in us in the same way. That which God wants us to do is beyond our capability. He doesn’t simply want to enhance our humanity, encouraging us to stretch ourselves beyond what we are used to. He wants to accomplish the impossible. Not what seems impossible, but truly impossible. Once we accept that, then perhaps we’ll stop depending on ourselves and depend on him who has the power.

While this can feel overwhelming to think about, the dynamic of God’s power proven through weakness is not a novel idea, nor unique to life in Yeshua. God’s power through Yeshua is available to a greater degree, but it is the fulfilment of a dynamic that began at creation. The second chapter of the Bible tells us: “the Lord God formed the man of dust from the ground and breathed into his nostrils the breath of life, and the man became a living creature” (Genesis 2:7). From the very beginning, the uniqueness of human beings is wrapped up with the instilling of the very breath of God. The essence of who we are as God’s image bearers is dependent on his power, not our own. As Paul illustrates, all people were designed to be treasure-filled clay pots.

The power to live as human beings according to God’s design has always and will always reside in God and not in us. That means we shouldn’t expect to feel able to do what God wants us to do. On the contrary, the more open we are to what God wants us to do, the less able we will feel. Therefore, don’t be surprised when you honestly think to yourself that what God is telling you to do is impossible for you, because it is.

This doesn’t mean that you can do anything you want whether you are able to or not. Many well-meaning people are willing to do things they are not equipped to do. If God is not so directing, that is foolishness. Paul certainly had skills in communicating. He was effective in preaching and teaching. Yet he was taxed beyond his ability, not simply in his skill to communicate, but every aspect of life. The challenges he faced as he served God were overwhelming to him. Yet God’s power was made perfect through this weak vessel. He wants to do the same through you.

Is It Getting Blurry? Half Empty or Half Full?
Scroll to top