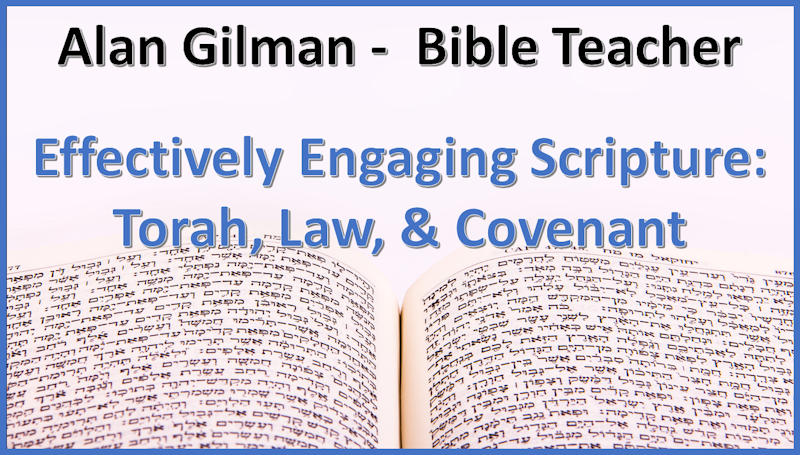 One of the most misunderstood concepts in the Bible is what is commonly referred to as “the Law.” Without a truly authentically biblical grasp of the meaning and place of the Law, we will never be able to engage Scripture as God intends. What the Law means, its purpose, and its relevancy if any, in the life of the believer in the present day has been controversial through the centuries. Some believe that the “new” in New Covenant necessitates a complete break with anything that comes before, especially if it has Moses’ name associated with it. On the other extreme, there are those who claim that if it’s anywhere in the Bible, then it must have direct application to us today. Both of these oversimplify the God-designed complexity of Scripture, thus preventing us from fully experiencing it as we should.

When Paul wrote, “All Scripture is breathed out by God and profitable for teaching, for reproof, for correction, and for training in righteousness, that the man of God may be complete, equipped for every good work” (2 Timothy 3:16-17), he had the Hebrew Scriptures (Old Testament) in mind. We know this since the New Covenant Writings (New Testament) were in its earliest stages of development. Paul here asserts that not only is Hebrew Scripture divinely inspired, it has been designed by God as our equipment for effective godly living. Any theological, philosophical, or practical approach that aims at disconnecting us from this section of Holy Scripture, cuts us off from God’s essential communication to us.

The Law as Negative?

But doesn’t Paul refer to the Law in negative terms, dissuading his readers from submitting to it in any way? For example: “Now before faith came, we were held captive under the law, imprisoned until the coming faith would be revealed” (Galatians 3:23). This and other passages depict the Law as relevant for only a time. The writer of the letter to the Hebrews apparently agrees: “In speaking of a new covenant, he makes the first one obsolete. And what is becoming obsolete and growing old is ready to vanish away” (Hebrews 8:13). This seems to be in line with Yeshua’s own teaching, whether the six times in the Sermon on the Mount, when he says “You heard it was said, but I say to you” (Matthew 5:21-48), his teaching on the greatest commandment (Matthew 22:35–40, Mark 12:28–34, Luke 10:25-28), or the new commandment (John 13:31-35).

How can Paul assert the usefulness of the Hebrew Scriptures, while at the same time appear to call his readers to distance themselves from it? This apparent contradiction is resolved once we understand the breadth of the Scriptures’ teaching on this matter.

We will begin by looking at the Hebrew and Greek words normally translated into English as “law.” Then we will discuss the relationship of law to the concept of covenant. While confusing at first, I am sure that the closer we look, the more straightforward this will become. My hope is that you will discover how Hebrew Scripture, including the Law, functions within a New Covenant context.

One of, if not the, reason why this subject is confusing is that the term for “law” in both the Hebrew Scriptures and the Greek New Covenant Writings is used in different ways in different contexts. The term “law” in the English Bible is a translation of the Hebrew word, “torah.” But torah actually means, “direction” or “teaching.” The reason why English Bibles use law is because the earliest Greek translation of the Hebrew Scriptures, called the Septuagint (often referred to as LXX), used the word “nomos,” meaning, as you might guess, law. The Greek word nomos and English word law are not completely wrong. Law is a normal word for rules and directions, whether they be humanly derived or divinely inspired. However, it isn’t the most helpful in that it tends to give the impression of a cold legal code, while God’s torah is far more dynamic and engaging. As it is embedded within the story of Israel, we are meant to understand God’s directives as part of real-life experiences, thus providing the reader, then and now, with more than a list of rules, but rather an extensive understanding of life. This is why it is better to take “torah” to mean more than simply law, but rather God’s instruction.

Just as it is common to refer to a collection of laws as “the Law” so, the word torah, depending on context, may be a reference to a particular directive or the whole collection, the Torah. Another use of Torah as a collective term is how it acts as a title for the first five books of the Bible. That’s because these books are associated with the giving of the Torah (beginning with Genesis as a sort of prologue, followed by Exodus through Deuteronomy).

Because the word “torah” means direction or teaching, not simply legal statements, any correct understanding of God’s directives, in part or as a whole is also torah. So, in the broadest sense of the word, torah refers to all that God has revealed throughout the entire Bible as well as legitimate interpretations. That doesn’t mean every aspect of God’s torah is applicable to every person in every place at every time. We will look at how to approach this broad understanding of torah shortly, but first, we need to note one more key usage of the word that will make all the difference to this discussion.

So far we have seen that Torah can be a particular human rule, good or bad, or it can be a directive of God. It can be used in a collective sense as a way to refer to all of what God instructs, be it the specifics through Moses or the full body of scriptural teaching and interpretations. Torah is a way to refer to the first five books of the Bible. And finally, it is intimately associated with the system or covenant within which God revealed his instruction to Israel.

The New Covenant Writings are aware of all these uses (I provide one example per use here; for a thorough word study, see https://biblehub.com/greek/3551.htm). Like Hebrew, the Greek word nomos can mean laws in general, humanly or divinely derived (Romans 3:27); God’s directives as given by Moses (Matthew 5:18); the books of the Torah (Matthew 7:12); God’s timeless directives (James 2:8); or the Sinai covenant (Galatians 3:23).

Paul’s concern over not being “under the law,” has to do with Torah as covenant. This is similar to regarding it as obsolete in the Book of Hebrews. Both writers are addressing for different reasons that there has been a change of the system governing God’s instruction. Hebrews clarifies this by stating: “For when there is a change in the priesthood, there is necessarily a change in the law (nomos/torah) as well” (Hebrews 7:12). The Levitical priesthood was a core constitutional component of the Sinai Covenant. The change in priesthood from the descendants of Moses’s brother Aaron to the eternal priesthood of the Messiah radically transforms the covenantal system.

For Paul, this covenantal change had enormous implications for his God-given mission to the non-Jewish world. The Sinai Covenant constituted the people of God exclusively as natural Israel. The New Covenant as promised by Jeremiah (see 31:31-33) and instituted by the Messiah allowed for the God of Israel to be fully embraced by the nations without submitting to an Israel-centric system.

The reconstitution of the people of God under the New Covenant doesn’t dismantle natural Israel as some might think, however. Israel as a distinct nation was eternally established by God through his earlier covenant with Abraham, Isaac, and Jacob. What’s changed is that the intimacy with God which Sinai sought to bring about but failed due to Israel’s unfaithfulness is now available to all nations through the New Covenant as established by the Messiah.

This helps us to understand what was going on in Acts chapter 15. The controversy over whether or not non-Jewish believers in Yeshua had to be circumcised and keep the law of Moses was a covenantal question. In those early days of the Messianic community, some thought that there was to be absolute continuity with the Sinai Covenant. They didn’t yet understand the full implications of constitutional change. It would be years before the change of priesthood spoken of in Hebrews would be vividly demonstrated by the destruction of the Temple and the end of the Sinai sacrificial system. Still, Paul demonstrated with agreement from Peter, James, and the others, that with the dawning of the Messianic age in Yeshua, the truth of God and his instruction (torah) could be exported to the nations without making non-Jews subject to the old Sinai Covenant.

This meant that Jewish and non-Jewish followers of Yeshua would grapple with God’s inspired written word (the Hebrew Scriptures exclusively in those days) within the New Covenant system. It would necessitate determining what of God’s directives were universal and timeless, which ones, if any, were for Jewish people only, and which ones were rendered obsolete by the change of covenant. The New Covenant Writings help in this regard but provide no easy formula. They help because we see the implications of the teaching of Hebrew Scripture throughout (even though many readers are not aware of this). And yet, there is no clear indication, contrary to what some may think, as to how to classify God’s directives into ancient Israel only vs. relevant to the worldwide New Covenant community. This means each generation and cultural context needs to discern by careful study and the help of the Holy Spirit how the Hebrew Scriptures speak to us today. But that they do, there is no doubt.

Jeremiah captures the essence of torah’s continued relevancy in his prophesy of the New Covenant (Jeremiah 31:31-33). While the New Covenant was not to be like the old one, under the New Covenant, God would cause torah be internalized. Not only would this result in his people having passionate willingness to obey God’s directives, his directives themselves would be understood to the depths of their intent. This is what Yeshua was preparing his followers for when he said, “You heard it was said, but I say to you” mentioned above. He wasn’t contradicting God’s directives as revealed in the Torah. He was contradicting popular thought by providing God’s own perspective on his word. God always intended his word to be followed from deep within our beings. Under the Sinai Covenant this wasn’t possible because sin (that which twists human beings away from God) had not yet been dealt with. It would take Yeshua’s sacrifice and overcoming of death to open the way to a new system within which God would be intimately known and his instruction (torah) to be followed from the heart.

King of the Jews God’s Faithfulness
Scroll to top