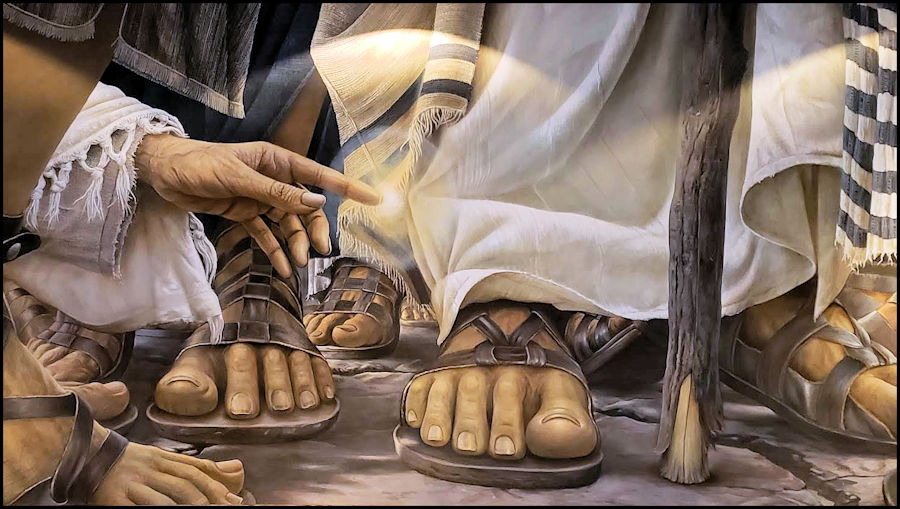 From a painting of the “woman with the flow of blood,” Duc In Altum Spiritual Center, Ancient Migdal, Israel

One of my goals on our trip to Israel last September was to see how we could tweak our next tour to make it even better than planned. One of those tweaks is the inclusion of a visit to the spiritual center and excavations in Ancient Migdal (Magdala), the home of Mary Magdalene. An Israeli friend of ours strongly recommended it. It didn’t disappoint. Situated on the north-west shore of Lake Kinneret (Sea of Galilee), it is one of the more recent such developments in Israel. It includes an excavation of a first-century synagogue along with some unique finds (see video below) as well as remnants of a market and other buildings.

We also visited the spiritual center on site, called “Duc In Altum,” taken from Jesus’ instruction to Simon Peter to “put out [their nets] into deep water, resulting in a most unexpectant, miraculous catch of fish  (Luke 5:4). We didn’t expect a place of such beautiful craftsmanship and meaning. As we entered, we walked into a circular atrium with eight pillars dedicated to various women who played a key role in Jesus’ life. Surrounding the atrium were a series of four small chapels each featuring a mosaic of a different Gospel story. Straight ahead was the much larger “Boat Chapel,” dedicated to Jesus’ preaching from the boat, the context of the catch of fish already mentioned.

The biggest and most pleasant surprise was waiting for us downstairs. The Encounter Chapel is modelled after a first century synagogue. At the front is a mural-sized painting of the story of the woman with chronic bleeding. We are not a fan of religious paintings, but we were both taken by this. No faces, but so powerful! Several people we have shown it to say they never thought about how low down the woman would have had to stoop to touch the hem of the Messiah’s garment.

My first thought while walking around the atrium upstairs was “this is feminism at its best!” Since then I have thought quite a bit about the painting and the story it represents. I don’t think we can overstate the tenacity of this woman. Lately, I have been spending considerable time in the Gospel of Mark. There we read “She had heard the reports about Jesus” (Mark 5:27). This was sufficient for her to push her way through a crowd, knowing she was ritually unclean and would contaminate every person she touched. The Gospel of Mark seems to be specially crafted to demonstrate the various reactions of all sorts of people. I am guessing this was to provoke the hearer (as most people would hear not read the book) to respond. Unlike scholars and other religious leaders who are so cautious and political around Jesus, this lady has chutzpah! Pushing her way through the crowd, she stops at nothing to get to the Messiah, even stooping to the ground (picture 1st century ground!), just for a single touch of his hem. Unlike the scholars and such, all she had to go one was “reports.” But that was good enough for her. Better than that! It was good enough for God as she was instantly healed.

People in our day tend to look askance at ancient times especially when it comes to the roles of men and women. I get the impression that many picture men sitting around on thrones, while women are subjugated as nothing more than sex objects and slaves. Perhaps many women were thus treated. But so were many men. Life for most people, both men and women, for most of history has been very difficult, full of suffering and hardship as they struggled simply to survive. In spite of that, as Ancient Migdal reminds us, there were women who found a way to make a significant, positive difference. And as we read about them, given we assume female involvement in important matters in olden days was to be discouraged, we would expect to find disparaging remarks or other comments of surprise, but we don’t.

Even if we did, I don’t know if they would care. Most people in history who have made significant contributions didn’t spend their time complaining about the injustices preventing them from doing good. Instead they looked for ways to serve God and others. The women commemorated in the atrium at Duc In Altum, are not only an example of feminism at its best; but humanity at its best.

Scriptures from the English Standard Version

Watch as Alan shows a couple of most interesting items found at the first-century synagogue excavation in Migdal (Magdala):