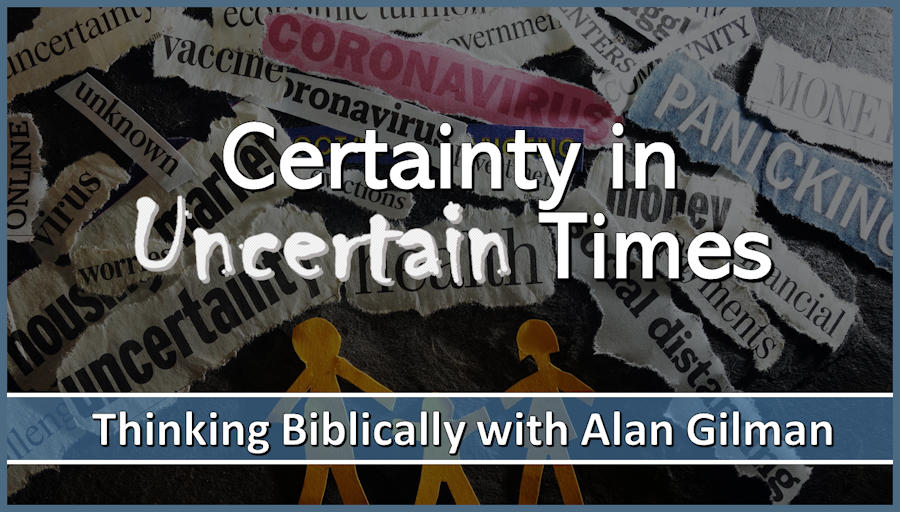 This past school year marks five years since I became the developer and teacher of the Bible class at St. Timothy’s Classical Academy. Four of these years, I have been given the awesome responsibility of delivering the graduation speech to the eighth-grade class at the year-end gathering. The weight I felt was far greater this year due to the restrictions of COVID-19. I can only imagine the depths of disappointment felt by the grads, the other students, their families, and staff due to closing the year, watching via Zoom. I so wanted to say something that would make a difference.

What follows is the text of my address from Friday, June 19, 2020. It has been slightly edited it to remove some personal references.

I hope this helps you find some direction and stability in this uncertain time.

At the beginning of the year—No! Three months’ ago no one expected that we would be having a virtual end-of-year “gathering.” But so much has happened since mid-March when it was first decided the school would close for a couple of weeks. I remember talking to Dr. Small at that time. Even then she wondered whether or not schools would reopen. It sounded so strange thinking like that back then. The only thing that was certain was uncertainty. No one really knew what was going on or what was going to happen. I am not sure that now, three months later, even with more things opening up, if it’s any clearer.

So I am attempting to say something helpful to you five as you get ready to start a new chapter of your lives, when we don’t know what that chapter is going to look like. Having not had the opportunity to chat with you these past few months, I don’t know where each of you are at with what’s been going on or how you are thinking about your future. Yet, I am pretty sure that you all pictured a very different departure from St. Timothy’s. Perhaps one or more of you are greatly disappointed with how this has all turned out. Dashed expectations, be they big or small, can deeply affect us.

In the Book of Proverbs, chapter thirteen, verse twelve, King Solomon writes: “Hope deferred makes the heart sick, but a desire fulfilled is a tree of life.” According to Solomon, deferred hope, delayed expectations, in other words, are sufficient to make us heartsick—really sad and discouraged. How much more heart-sick might dashed expectations make us? We all naturally look forward to things. Most often we don’t know we are doing it. We normally orient our lives towards what we anticipate is coming in the near or distant future, whether it be breakfast when we wake up or what a St. Timothy’s graduation is supposed to look like.

Sometimes, we can get our hearts so firmly set on something that, if it doesn’t happen or doesn’t happen in the way we picture, our hearts can break. I don’t know about you, but I have had my share of disappointments in my life. Don’t get me wrong, I have also been richly blessed and have often been wonderfully surprised by God’s goodness (good surprises are a different kind of not experiencing what’s expected, but that’s a different topic).

Yet, I am bit embarrassed to say that despite God’s goodness to me, I find myself at times still feeling the sting of past disappointments. One painful memory I have never been able to fully shake might sound silly to some, while others will completely understand. I was about ten year’s old. The year, 1968. The dinosaurs had recently gone extinct—kidding! Seriously, I had just recently got into hockey—remember hockey? Through a relative I was given tickets, really good seats, to see my very first game at the Montreal forum. However, when I woke up that Saturday morning, I had come down with a cold and my mother wouldn’t let me go. As I said, this all might sound silly to some of you. You may be thinking, “Why would he share something from fifty-two years ago, from his childhood, about a game?” It’s because those childhood experiences, and how we deal with them, can affect us for the of the rest of our lives. I have learned that unless we learn to deal with disappointment well, beginning when we are young, it can ruin our lives.

One of the ways people learn to cope with disappointment, dashed expectations, is by never getting their hopes up. But that’s a symptom of the heart sickness Solomon describes. They go to bed at night expecting the sun will rise the next morning, but with regard to the kind of opportunities and possibilities that fill us with intense longing, it’s easier to pop those bubbles before they get too big, lest they blow up in our faces, because the pain of disappointment is too difficult to bear. Expect nothing and you won’t be disappointed.

Is this the new normal for the COVID-19 generation? I hope not. I don’t believe for a second that this is how we are to deal with the current, or any other, time of uncertainty. While it is good to learn not to have unreasonable expectations, God made us to be his instruments of positive change in the world. That requires hope: a hope that copes well with uncertainty and dashed expectations.

I would like to share some guidance from the Bible that I believe can help us all to not only cope in uncertain times but thrive. I am going to read three verses about Abraham from the New Testament letter to the Hebrews. The letter to the Hebrews is a letter of encouragement to a community of 1st century Jewish Jesus followers, who were having to deal with their own time of uncertainty. The pressures they were facing were starting to get to them. As a result, they had become afraid of being too public about their faith. The writer of the letter urges them not to give into their fears or to lose touch with the truth and reality of God they had powerfully experienced in Jesus. In this part of the letter, the writer provides somewhat of a biblical faith hall of fame: people of the past, who put their lives on the line for the one true God in spite of whatever was going on around them. Sixteen people are mentioned by name plus many more nameless ones.

Considerable attention is given to Abraham, which is fitting because the Bible regards him as a prime example of what it means to be a person of faith. I am reading Hebrews, chapter eleven, verses eight through ten:

By faith Abraham obeyed when he was called to go out to a place that he was to receive as an inheritance. And he went out, not knowing where he was going. By faith he went to live in the land of promise, as in a foreign land, living in tents with Isaac and Jacob, heirs with him of the same promise. For he was looking forward to the city that has foundations, whose designer and builder is God.

Verse eight tells us that Abraham “went out, not knowing where he was going.” Sounds like someone who went on a journey with no plan, no map, no expectations, no disappointments as if he walked aimlessly about as if that’s what it means to be a person of faith, which is exactly how many people, some Christians included, think of faith. Faith to them is blind, shutting our eyes and minds to everything around us in order to somehow connect with God and the spiritual dimension. In a time of uncertainty as the one we are living in right now; such an approach may be appealing. Since we can’t seem to get a handle on what is going on, why try? Disconnect from everything and just believe (whatever that is). Whatever that is isn’t anything close to what Abraham could relate, because that’s not faith as far as he and his experience of God and life were concerned.

Only after Abraham’s father dies in Haran does he continue the journey with the others. It appears that the journey was originally initiated when God spoke to Abraham while they were back in Ur. God had told him what would happen if he took this journey, including becoming a great nation that would bless the whole world and that this great nation would one day possess the land to which God called him to go, the Land of Canaan. That’s what Abraham knew. What he didn’t know was: everything else. He didn’t know what would happen along the way or that he wouldn’t see what God promised him in in his lifetime.

So, he knew where he was going, but he didn’t know how things were to work out. And even as they did, it was nothing as he would have expected them to. All this occurring in a foreign land. The Bible’s great example of what it means to live by faith was an immigrant called by God to live his senior years in a strange and hostile land, an experience many people understand. He lived with uncertainty upon uncertainty. Yet, he knew two things for sure.

First, he knew the general location of where he was to go. Second, he knew God. And knowing God enabled him to place his expectations, not in his circumstances, but in God and his word to him. As we read: “For he was looking forward to the city that has foundations, whose designer and builder is God.” That’s to say that he placed his hope not on the temporary successes that the world has to offer, but on the things of God that last forever.

The things of this world are temporary. They are by nature uncertain, unreliable. COVID-19 didn’t change anything. It only exposed the truth about the nature of our broken world.  The postponements and cancellations have caused us a lot of grief, but at the same time, they have provided us with a much-needed reality check. What have we set our hearts upon? We were made for greater things than the unreliable, uncertain temporary trinkets the world offers.

St. Timothy’s is a school that has sought to teach you the things that truly last, that really matter, that you can count on. No matter what happens, God’s goodness, God’s truth, and God’s beauty can always be found within his creation. Graduation gatherings and other ceremonies, whether we meet in a building or have to find other ways to connect with one another, the God of Abraham is way bigger than our routines and our expectations. Looking to him, focusing on what he says is important: loving him and loving one another, learning to tell the difference between what is good and what is bad, what is true and what is false, that there really is goodness, truth and beauty in the world he made, will keep us from setting our hearts on what’s uncertain in life and enable us instead to build our lives on what God is building, an everlasting city where no one will experience disappointment ever again.

The Blessing: Not just a fad Moving Mountains
Scroll to top