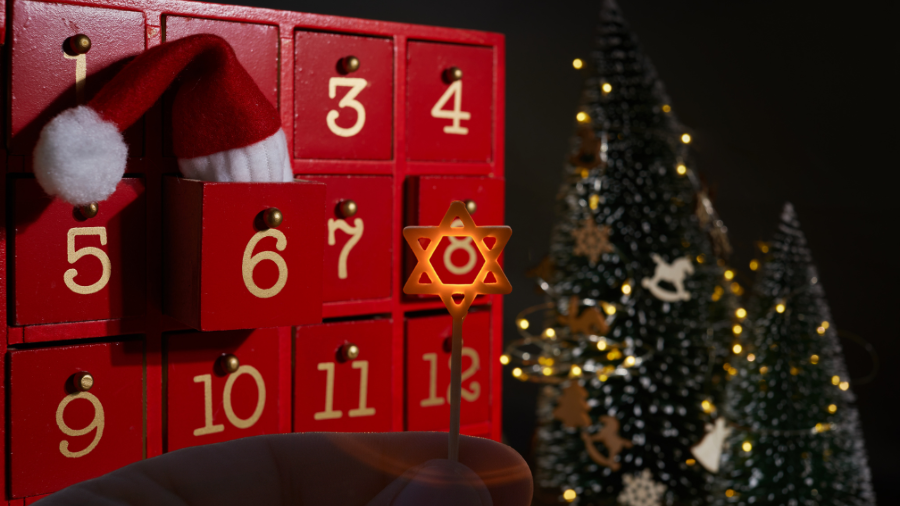 As a Jewish boy growing up in Montreal, Christmas was a very joyous holiday of happy children being showered with toys. At least that was my impression watching television, since I didn’t have any direct experience with the matter. I remember the classic Christmas specials, “A Charlie Brown Christmas,” “How the Grinch Stole Christmas,” “Rudolf the Red-Nosed Reindeer,” and “Frosty the Snow Man.” Jesus, Himself, meant nothing to me, since he had nothing to do with our people—or so I thought. I vividly remember my mother’s violent reaction to my saying that I wish we weren’t Jewish, so we could celebrate Christmas, my interest being solely wrapped up in the presents. The fact that Christians were “them” and we Jews were “us” was burnt into my heart that day.

It was shortly before my 19th birthday, in September 1976, that I was first introduced to the authentic Jesus as the long-awaited Jewish Messiah. Key misunderstandings about the Bible, God, and Jesus were corrected that day as the Lord began his transformative work in me. Since then, the Bible has been core to my life as the definitive interpretive lens through which I see the world.

In God’s providence through the years, as he has taken our large family back and forth across Canada, we have been enriched by being a part of several believing communities. In most of these settings, the traditional Church calendar wasn’t a prominent feature. In fact, it was my role as pulpit supply preacher and then interim pastor at All Saints Lutheran Church (between fall of 2018 until this past spring) that made occasions such as Advent expected observances that required my attention.

Prior to my delving into Advent for the first time, I assumed that it was not much more than a lead-up to Christmas.

I approach Christian tradition in a manner similar to how I approach Jewish tradition. In fact, it is an approach that I use for all of life as best as I can. Whatever is clearly directed by God, my heart is to do it; if it’s forbidden, I try to avoid it; if it is neither commanded nor forbidden, I seek God for wisdom on how best to engage it, if at all. Having been a believer in a wide variety of contexts, both geographically and denominationally for over 46 years, I am deeply aware of the wide range of sentiments among different Christian communities. As I attempt to put God and his Word first, I also want to be sensitive to my brothers and sisters, however they may express their faith in Jesus.

This is all to say that for something like Advent, I don’t carry a great deal of sentimentality. Since it is extremely foreign to my upbringing and not central within my congregational settings, there are no emotions attached. But when called upon to minister God’s word within a community to which it is important, I attempt to face the task in a biblically sound and historically accurate way.

Prior to my delving into Advent for the first time, I assumed that it was not much more than a lead-up to Christmas. Isn’t that what Advent calendars are all about, for example? And as far as Christmas, itself, was concerned, while Canadian believers clearly acknowledge the reality of Jesus’ birth at this time of year, its celebration appears to be more about other things than the Lord and His coming.

The term means “arrival,” but in a much more holistic way than simply celebrating the Messiah’s birth.

With my preconceived notions in mind, I was delighted to discover how rich Advent actually is. The term means “arrival,” but in a much more holistic way than simply celebrating the Messiah’s birth. Christians tend to refer to Jesus’s first and second comings as two related but distinct events. But scripturally speaking, Messiah’s advent is one complex event, beginning with His incarnation as a baby in Bethlehem and culminating with His eventual triumphal appearing. When encountering messianic prophecy in the Hebrew Scriptures, the anticipation of Messiah is expressed in a way that gives the impression that upon His arrival He would complete His entire mission at once.

This reasonable impression led to much misunderstanding within the Jewish community of the First Century, His followers included. Some assumed that the defeat of evil, specifically through the overthrow of the oppressive Roman regime, would be the proof of messianic identity. Jesus’s lack of explicit political rhetoric, His failure to raise up an army, and His tendency to criticize the religious establishment was confusing to His followers and distressing to others. No one anticipated that the messianic mission was going to be accomplished through a lengthy process over time, beginning with Messiah’s offering Himself as the perfect and final sacrifice for sin. Neither did they foresee the need for His followers to extend his reign throughout the earth until the time of His return.

Advent and Christmas are designed to be reminders of the Messianic Age in which we now live.

The four-week period of Advent anticipates it all, not only the incarnation. The Advent themes of hope, peace, love, and joy are more than holiday niceties, geared to prepare our hearts to welcome the Christ Child. They are reflections of the essence of messianic triumph. Hope is the positive expectation we have as a result of Jesus’ coming. Peace is the restoration of all things united under Messiah’s rule. Love is the bursting forth of God’s generosity through the gift of His Son who has promised to be with us forever. Joy is the effervescence of vitality bubbling forth due to Messiah’s victory along with our intimate relationship with Him through faith.

Both Advent and Christmas are more than celebratory occasions in and of themselves. They are designed to be reminders of the Messianic Age in which we now live. As we await the culmination of His mission, we mustn’t allow the vast number of disruptions, restrictions, and disappointments of the past couple of years to distract us from the reality of His ongoing presence and power. Messiah has come!

Progress, but in What Direction?
Scroll to top