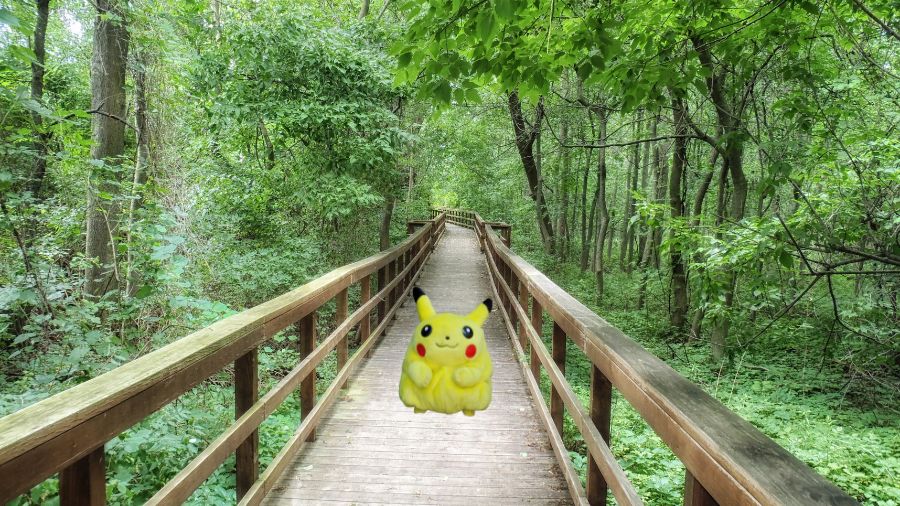 Pokémon Go is one of the most popular fads of all time. This smartphone-based game enhances the real-world by placing imaginary creatures, called Pokémon, in all sorts of locations based on GPS coordinates. Pokémon may be found down your street, in parks, in and around tourist attractions or historic landmarks, and so on.  As you look at your normal surroundings through your phone’s camera, you never know when or where a Pokémon may appear. Many are enthralled by this interactive game experience superimposed on what was just recently boring, normal life.

Pokémon Go is an application of a technology that’s been in existence for some time called Augmented Reality (AR). It is unlike Virtual Reality (VR) in that while VR immerses users into a simulated environment, AR provides users with additional information or an enhanced experience of the real world. An example of VR is a flight simulator, where users experience flying without being in a real airplane. With AR we can look at a famous landmark such as the Eiffel Tower or the Empire State Building through our smart phone and on the screen pops up historical background or tourist information. There is a surveying application that provides geological data when viewing terrain. In both these cases our view of the real world is enhanced or augmented with additional information. While this information is not completely unknown, it is not readily known within the immediate context. Therefore, we can say that AR makes the unknown known or the invisible visible.

What if I told you that you can have the power the see the invisible or to know the unknowable without Pokémon Go or any application of augmented reality. You don’t even need a smart phone. If you think AR is something, just wait until you try “God-mented Reality”!

God-mented Reality comes in several forms. First, while the world around us and its events are knowable through our five senses, understanding the world as the creation of God, made on purpose and for a purpose, is not naturally known. In order to truly perceive the meaning of life, we need the revelation of God. The Bible augments our natural experience of life by accurately interpreting the world in which we live. While proponents of Intelligent Design are right to demonstrate the reasonableness of deducing that the complexities of life point to a designer, it is the Scriptures that clarify his identity and intentions.

The negative elements of our sin-soaked world easily distracts from the truth that “The earth is the Lord’s and the fullness thereof” (Psalm 24:1). This came to me so dramatically during my trip to Haiti this past summer. The troubles of this very poor country had eclipsed the greater truth of God’s presence and beauty in that land. Through his Word and the conviction of the Holy Spirit, I was able to see Haiti through God’s eyes.

Similarly with events. The Bible is full of catastrophic phenomena, from the flood of Noah’s time to the ten plagues of Moses. We know that these were not random freak natural events, because we have recorded prophetic utterances to inform us that they were purposeful acts of God. Real things, real events, but augmented with the necessary additional information that enables us to relate to these things effectively.

If you say “God-mented reality” aloud, you may hear it as “God-meant-it reality.” This is exactly how Jacob’s son Joseph viewed his life. Victimized by his jealous brothers, he knew there was more going on than the negative effects of his brothers’ actions. He saw the powerful hand of God at work in spite of their evil intentions: “As for you, you meant evil against me, but God meant it for good, to bring it about that many people should be kept alive, as they are today” (Genesis 50:20).

It gets better! Jesus said, “Truly, truly, I say to you, the Son can do nothing of his own accord, but only what he sees the Father doing. For whatever the Father does, that the Son does likewise” (John 5:19). Jesus’s life was not a reaction to circumstances nor driven by a cause. He had nothing to prove nor was he fulfilling his dreams. He also didn’t live a spiritual life disconnected from the material world. Far from it! He interacted with the real world of God’s creation, effectively confronting the effects of sin and evil based on what he saw God his Father doing. God-mented reality. He was keenly aware of what God was doing in all the ways described about, plus he saw into the invisible realm. He knew the difference between natural illness and demonic oppression. He saw people’s hearts and knew their thoughts. This is not due to his divine nature, as some may think, but because of his ongoing dependency on the Holy Spirit; the same Holy Spirit who has been poured out upon every one of his followers.

Note that the promise of the Spirit as foretold by the prophet Joel and fulfilled on the Jewish festival of Shavuot (Pentecost) majors on seeing into the invisible realm:

Dreams, vision, prophesying – God-mented reality – God’s enabling his people to proclaim what our natural eyes cannot see. The creation is made up of two aspects, the visible and the invisible. Most of us only focus on the visible, resulting in our being like the prophet Elisha’s servant, who was overwhelmed by his circumstances. Elisha, on the other hand, lived in the awareness of both the visible and invisible spheres. That’s why in the face of a great opposing army, he could confidently tell his servant, “Do not be afraid, for those who are with us are more than those who are with them” (2 Kings 6:16).  In response to Elisha’s prayer, God caused the servant to see the invisible realm: “So the Lord opened the eyes of the young man, and he saw, and behold, the mountain was full of horses and chariots of fire all around Elisha.” There was a stronger, yet unseen army, fighting on their behalf, but until the servant experienced God-mented reality, his understanding of reality was insufficient. It’s not as if there exists more than one reality. The creation is made up of both the visible and invisible realms. Our problem is that we, like Elisha’s servant, tend to only be aware of the visible. But now due to the outpouring of the Holy Spirit, we too can have our eyes open. The better we see into the invisible realm, the better we will be able to understand and interact with the visible.

I am aware of the abundance of misunderstanding and abuse there is with regard to human interaction with the invisible realm. But this should not stop us from pursuing an authentically biblical approach to such things. Bogus claims of the miraculous and claiming the Lord’s leading to justify selfish ambition are no less harmful than the denying of Scriptures’ teaching on spiritual gifts, prophecy, healing, and so on. It is time to follow the Messiah and start doing what we see God our Father doing.

Why spend time trying to find funny little creatures through your smart phone, when God wants to reveal the invisible world to his people. Through God-mented Reality we can begin to see the world in which we live in its fullness and be better equipped to set people free from their oppression, helping them to be all that God wants them to be.