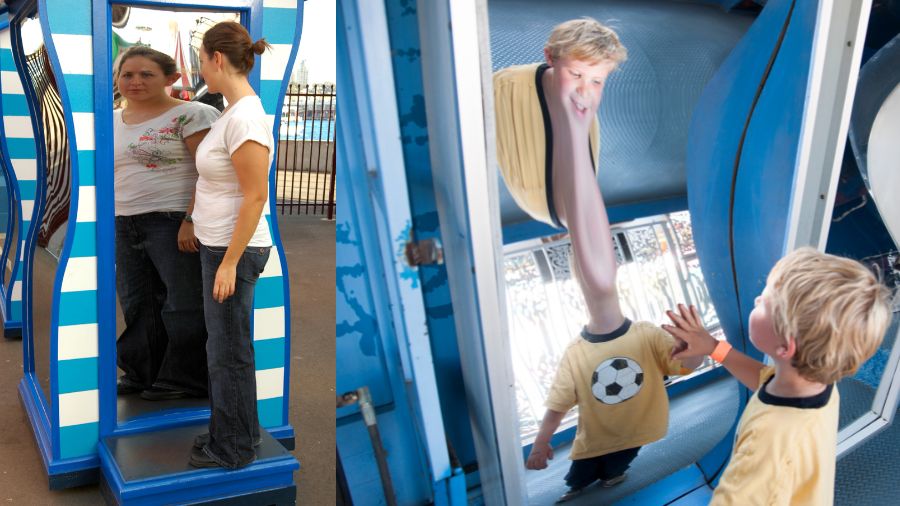 When my wife and I were recently in Vancouver, we visited the world-famous Stanley Park for the first time in years. As a treat we took our two youngest children on the miniature train. In the waiting area they had something I hadn’t seen in years: two fun-house mirrors. Not exactly the place where I would expect to see them, as they are normally found in a traditional amusement park attraction called a “Fun House”. Fun house mirrors are designed to provide (hopefully) humorous reflections, by skewing the mirrored image, thus making the subject and others look extremely tall, short, fat, or even upside down. The intended humor is found in how nonsensically people are represented. While the fun of fun house mirrors is related to how preposterous these reflections are, I don’t think most people would find them funny at all if they represented any semblance of reality, especially since they are actually very grotesque.

I grew up in a fun house, but there was nothing funny about it! No, I wasn’t raised in an amusement park. Rather, throughout my childhood and adolescence, everywhere I turned so to speak, I saw skewed, grotesque reflections. The problem was I didn’t know that what I was seeing was anything but normal.

Almost nothing was an image of reality. I had a father and a mother, plus three older brothers. But my family life was extremely dysfunctional. My parents bickered all the time. My brothers hated my parents, and left home as soon as they could. Being as young as I was while chaos reigned, I was helpless to do anything about it, except suffer. What furthered my distortions were words of love and demonstrations of affection that were part of my everyday life. My mother would dote over me and my father would take me out with him quite regularly. But I didn’t realize then that my mother’s love was more about satisfying her needs than mine, while my father’s desire for my presence was a ruse towards my mother as a way for him to get out of the house. My mother worried all the time and feared almost everything, demonstrating to me that the world was a very scary place. Both parents played the victim instead of looking for ways to constructively resolve issues. When he was young, my father determined that might means right, and became a body builder, so that he could beat people up when necessary. He was ashamed that my brothers and I didn’t share his physique, teaching me that my lack of strength meant I was helpless facing life’s problems. Along with that he taught me: “Money makes the world go ‘round,” and did he ever believe it! Almost every blow up was about money and, according to him, the lack thereof prevented us from enjoying life.

After years of skewed reflections, I was full of fear and could no longer cope. I was living in a world of lies, caught in a web of illusion in a nightmarish fun house that was anything but fun. No wonder I had a nervous breakdown at age eleven and panic attacks at eighteen.

Then one day I was given an opportunity to escape my fun house. A Friday afternoon in the Cote St. Luc suburb of Montreal, talking to a friend of a friend, I was presented with a whole new set of reflections. Could it really be that I was living in a crazy fun house; that the skewed reflections I had always thought were real had deceived me? As I was hearing a biblical case for Jesus’ being the Messiah for the first time, I was being presented with reflections of a clarity and sharpness that shone of a goodness and truth that I had never encountered before.

I stepped out of my fun house that day and discovered the real world for the first time. I cannot overstate that transition I experienced as God through Yeshua transformed my life. But what I didn’t know at the time is that I would carry with me many of the skewed reflections of my former residence. While God has wiped away many of the old images from my mind, others have stayed with me. Some of the ways my mind interprets circumstances and interpersonal interactions is still via old skewed reflections – old fun house mirrors that still need to be broken.

The thing that works to preserve my remaining skewed reflections is what made them so effective in the first place: I think they are genuinely accurate reflections of the way things are. Instead of perceiving the real world, one that is saturated by the presence and power of a loving God, I see myself alone under the threat of danger in an unsafe world.

The recent events in Edmonton, Alberta or Las Vegas, Nevada, not to mention the devastating weather disasters that took place before them, plus all sorts of personal and large-scale tragedies the world over may support the skewed reflections of my old fun house. But these circumstances, terrible as they are, do not reflect the whole story of the world in which we live. The world is extremely complex. The daily happenings of our individual lives are complicated; how much more are global events? Yet whether from the media, be it main-stream or social, or a chit chat over coffee. we are continually confronted by skewed reflections of today’s world. No wonder we see so much personal and societal breakdown. Our increasing inability to cope is largely due, not to the problems of life themselves, however real and serious they may be, but to the great amount of skewed reflections that distort reality all around us.

It’s not enough to exit the fun house. We have to also smash the mirrors wherever they may be.

That’s what Paul told the first century believers in Rome, when he wrote:

Do not be conformed to this world, but be transformed by the renewal of your mind, that by testing you may discern what is the will of God, what is good and acceptable and perfect (Romans 12:2; ESV).

It’s not good enough to exit the fun house of your old life. It’s starts there for sure. Our journey to reality must begin with being in right relationship with the God of reality by trusting in his Son, the Messiah, who gave his life for our sins. But it doesn’t stop there. Unless we smash our mirrors of skewed reflections, we will never be able to discern God’s good, acceptable, and perfect will. Instead we will continue in our dysfunction of distorted reality, unable to accurately interpret the personal and societal events of life.

But if we have the courage to smash the lying mirrors that continue to haunt our lives, not only will we discover ever-increasing freedom and goodness in our own lives, we will become reflections of reality to others, helping them to see how skewed their mirrors really are.

thanksgiving01_360 Do You Know the Messiah’s Name?
Scroll to top