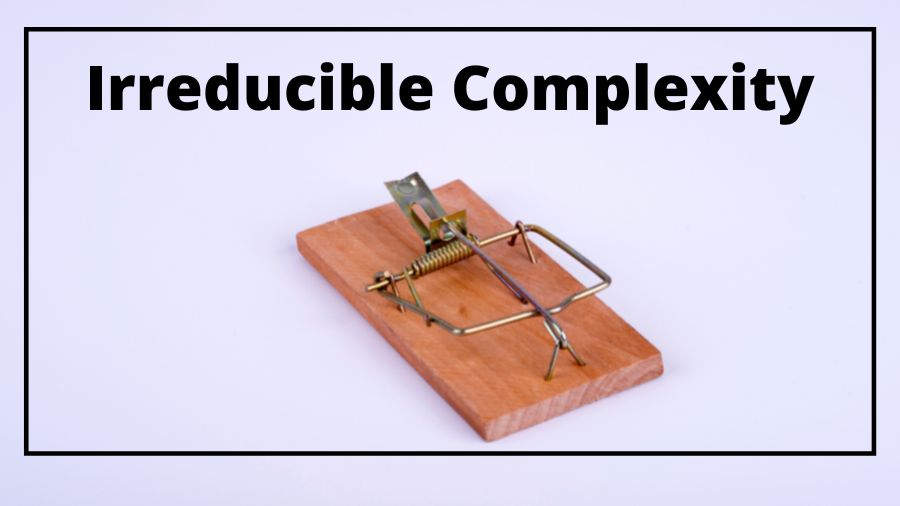 There is a concept central within the domain of Intelligent Design (ID) that is essential to an effective understanding of life in general. ID asserts that the existence of certain complex organisms is evidence that they are the creation of an intelligent being rather than the product of random matter and energy. These organisms either exist in their complex form or else they wouldn’t exist at all. There is no way that these complex entities could have begun as simple forms that became more complex over time. They had to come into existence in a state of complexity from the start.

Within the scientific community, there is discussion about the validity of ID and the appropriateness of the mousetrap illustration. But whatever irreducible complexity can tell us about origins, there are so many aspects of life that are, like a mousetrap, irreducibly complex.

Yet I find there to be a tendency among people to attempt to simplify the complex. This is not to say that there is no benefit in breaking down the mousetrap into its components. But that’s not the same as simplifying the mousetrap. Each of its components is essential in their own way, but a mousetrap is greater than the sum of its parts. To fully understand and appreciate the mousetrap for what it is, it must be regarded at as a complex whole. To ignore its intrinsic complexity is to disregard it entirely.

Much of life is irreducibly complex. While simplistic categories and formulaic approaches are far more emotionally comfortable than open-ended, multilayered complex analyses, oversimplifying anything that is intrinsically complicated misrepresents it.

Our society’s demand for sound bites and tweets doesn’t help. Few things, such as certain announcements and sports scores, can be fully communicated and understood with such brevity. But most things of importance ranging from relational issues to political discourse to scientific and philosophical matters require in-depth careful analysis. Anything less is a sham.

This is no less true for biblical studies and theology. Communicating the truths of Scripture in understandable ways does not require oversimplification. I remember hearing years ago it being said that pastors should not introduce their congregants to the wide variety of eschatological (end times) views because it would confuse them. Human beings made in the image of God are far more intelligent than that. It might be that a preacher or teacher is confused and hasn’t taken the time to sufficiently investigate issues such as these. Or they are attempting to understand aspects of life that God has not revealed. Attempts at providing information that has no basis in reality – guessing in other words- can mislead people into thinking that the so-called deeper things of Scripture are too difficult to understand.

There are too many examples of Bible stories and characters that are irreducibly complex to list here, especially since almost all (if not all) are irreducibly complex. How about the image of man being male and female? Simple? I don’t think so! Or Abraham, the man of faith, who was so worried that people were going to kill him because of his beautiful wife that he lied about being married to her? Straightforward? Hardly. Or how about Samson’s uncontrolled behavior? Or Israel’s great King David freaking out over his son Absalom’s treachery? Or another son of his, Solomon, the product of an illegitimate relationship being God’s choice to be his successor? And speaking of Solomon, who was endowed with wisdom from on high, yet he himself didn’t’ listen to his own advice. Pretty complex stuff, if you ask me!

Now that I have brought up Solomon, you may be asking “Isn’t the Book of Proverbs, which he wrote, short simple sayings, most of which could fit in a tweet?” Short, yes; simple, are you kidding? Proverbs are purposely designed to make you think.

But don’t we need to become little children to enter the Kingdom of God (see Matthew 18:3)? Indeed, we do, but that has to do with attitude, not simplicity. Also, it is amazing how children can understand complex things if given a chance. In a recent Bible class of mine, grades five through eight, I asked the question, “Was Jacob and his family’s migration to Egypt a good or bad thing?” Some immediately said “Good,” since they were saved from the famine. Others said, “Bad,” because they eventually became slaves. Still, others said, “Good,” because of the working out of the plan of God over time. But they had no trouble accepting it was “All of the above,” because of the complex nature of the situation. I purposely asked them a faulty simplistic question to highlight life’s complexities. Welcome to the real world of the irreducibly complex, where truth is not as straightforward as many people claim.

If we allow the Bible speak for itself in its splendid complexity, we will be far better equipped to live life in its complexity. We’ll get pushback from others who will continue to insist upon simplistic categories and definitions, however, truth and reality will not only survive, but will prove itself over time. Simplistic reasoning and narrow mindedness will be exposed for its foolishness if we are willing to embrace the irreducible complexity of Truth.